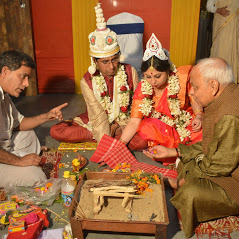 Hindu Marriage,Hindu Brides,Grooms–Marriage is a highly auspicious occasion in the Indian culture. According to the Vedas, the Hindu scriptures, marriage is a sacred lifelong commitment between a man and a woman. It is considered to be the strongest of all social bonds and is the initiation into a lifetime of togetherness.

The Vedic wedding ceremony consists of prayers, invocations, and vows recited in Sanskrit, the most ancient surviving language. The Vedic wedding ceremony dates back to over five thousand years. The ceremony is performed under a decorated canopy, the Mandap. The four pillars that surround the mandap represent the four parents. This signifies the important part they have played in raising their children to become the responsible adults they are today.The ceremony is performed before a sacred fire or Agni, which is the eternal witness of the marriage and all vows taken.

Every Hindu ceremony begins with the worship of Lord Ganesha, deity of peace and wisdom. This is done so people can find strength within themselves to remove any obstacles that may arise.

The original form of a baraat is a procession from the groom's house to the bride's house for the wedding ceremony. The joyous wedding day begins with the Mangal Vadya, the playing of Shehnai (a traditional wind instrument) and Dhol (Indian drum).

Swagatam (Welcoming the groom and his family)

The groom and his family are greeted at the doors of the Mandir (Temple) by the bride's parents and family. The mother of the bride then greets and welcomes the groom and his family into her own family. She blesses the groom by placing a tilak (red dot) on his forehead. The groom is then led to the mandap where the wedding ceremony will take place.

While the groom is sitting under the mandap the Madhuparka is performed where his feet are washed by the bride's parents. He is then offered Panchamrut, a liquid composed of milk, yogurt, ghee, honey, and sugar.

Kanyaa Daan (Giving away of the daughter)

The bride accepts her change of status from an unmarried woman to a wife by spreading turmeric powder on her hands. Kanya Daan is performed by the father (or uncle of guardian) of the bride in presence of a large gathering that is invited to witness the wedding.

Both the bride and the groom grasp their hands together and pray to God for His blessings. Samagree, consisting of crushed sandalwood, herbs, sugar, rice, ghee (clarified butter), and twigs is offered into the sacred fire to seek God's blessings for the couple.

The groom holds the bride by the hand and both walk three times around the sacred fire. Both offer oblations and recite appropriate Vedic hymns to Gods for prosperity, good fortune, and conjugal fidelity. They touch each other's heart and pray for union of their hearts and minds.

This is the most important rite of the entire ceremony. Here the bride and the groom take seven steps together around the sacred fire (Agni) and make the following seven promises to each other: As per the Vedic rituals, the groom sings "With God as our guide, let us take":

1.   The first step to nourish each other

2.   The second step to grow together in strength

3.   The third step to preserve our wealth

4.   The fourth step to share our joys and sorrows

5.   The fifth step to care for our children

6.   The sixth step to be together forever

8.   The perfect halves to make a perfect whole!

The Satapadi ceremony concludes with a prayer that the union is indissoluble. At the end of this ceremony, the groom and the bride become husband and wife.

The Mangal Sutra Dharana is the tying of the thread containing the marks of the Vishnu or Shiva on the neck of the bride by the groom.

The groom places sindoor (red powder) on the bride's hair symbolizing her as a married woman.

Aashirvaad (Blessing) The groom's parents bless the couple and offer clothes or flower to the bride, symbolizing her joining the groom's family. All those assembled at the ceremony shower flowers on the couple and bless them completing the marriage.